“We shape our tool, thereafter they shape us” – Father John Culkin

“In order to skillfully operate instruments a human being must internalize aspects of those instruments into their kinesthetic and perceptual habits.” – Joseph Weizenbaum 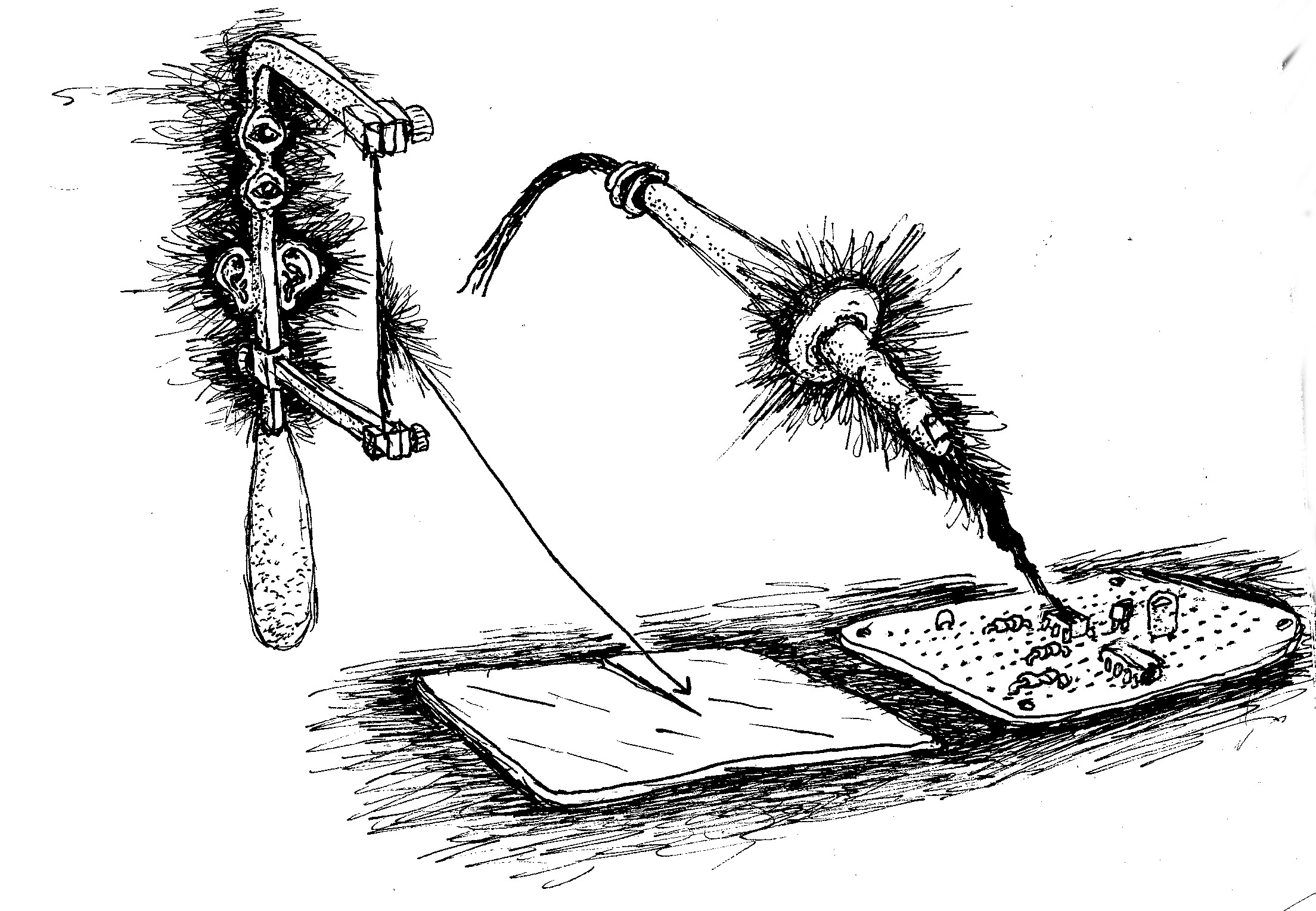 Working with any specific taxonomy of tools encourages me to leap into holes which exceed my height. For instance, I’ll get sucked into 3D printing, that printer will calmly lead me into a hole. After a while, I’ll notice how deep the hole is, scramble out, and live life in a non-narcotic arena. I’ll retreat to the woods, spend time with an elderly eccentric type herbalist, or sometimes I’ll settle for making some sauerkraut. Given the frequency of these transitions, I am quick to notice how technology/materials shape my perception. Most recently I noticed how the tools I use to work with copper have been shaping me.

I have been using copper all year to build circuits. My first perception was copper as a material which either made circuits work or, when placed incorrectly made them sputter, zap and explode. An aggravating material. A material which I needed to cut and solder into submission. Impulsively, I made a transition from circuit building to jewelry making. Jewelry making being far more emotional and process oriented. The material I worked with stayed the same (copper), but when the tools changed, my mind changed, developing a new attachment (lust?!) for the metal.

This change started when I found a large amount of scrap copper in my school’s dumpster. This copper was not suitable for circuits. It was oxidized in places, thick and old. I was struck with a desire to experience it in a more fluid way. I sawed it with a jewelers saw. I annealed it, and the copper burst into colors which had since been unimaginable to me. I made brass rivets and pounded them into the copper. I started this train of interaction just as I was reaching a point of complete dismay in my circuit building. Copper assumed a new shape in my mind. I learned that copper was “…an essential trace element that is vital to the health of all living things”. I felt a new closeness to it. I felt the destructive relationship which I used to have with it. The jewelers saw and the propane torch compelled me to experience my work in a more emotional, meaningful and useful way. When I went back to soldering copper my soldering iron was no longer a tool of domination; it took on some of the gentleness that the file and the saw taught me. My circuit building became far more enjoyable.

I questioned this new found pleasure. Now that I felt more emotional towards copper I felt fine controlling it. In this specific instance me feeling fine controlling copper is not very destructive, but I thought more on the effects that come of making such transitions. Especially transitions from technologies of control and suffering (Computer Programming , Circuit Building , Online Shopping ) to technologies which garner a more emotional attachment to materials (shoveling dirt, hand sawing metals, hugs, embroidering). I began to think that these transitions can compel people to further recognize control or to further actualize that control. A type of control which has a newly sewn woolen jacket draped over it.

See, I don’t mean this to be an inspirational tale, compelling the world of tech startups, software engineers and kid fascists to pick up their jewelers saws and gain a more emotional relationship with their materials. To disrobe, and transition to a more emotional state of being. No no, I mean the very opposite.

See, The particularly insidious entities, like myself, like Rob Rhinehart , like the US military (as described in War in the Age of Intelligent Machines and the John Hopkins University APL journal), are entities who oscillate between control and non-control as a means to gather even more control. Those who are entangled in computer systems become far more dependent on intensely hierarchical and control oriented structures, much more so than someone who embroiders would. Something terrifying happens when the emotional and the control oriented are melded. Systems are birthed which further mask the intense control by making those systems more emotional. Google Now does this, Facebook does this, and plenty of systems designers in the US military do this.

Wouter (Hampshire College '14) is one of six 5CollDH undergraduate fellows for the 2014-2015 academic year.